I found another writing competition based on this photo: 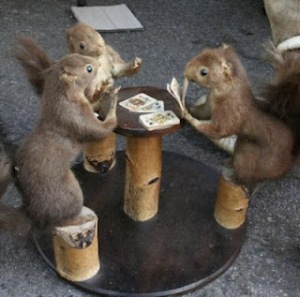 And here’s my submission – I hope you like it:

He stirs as the sun dips peacefully below the horizon. His deep, even breathing becomes a yawn, followed closely by a very satisfying, bone-popping stretch. Sighing heavily, he sits back on his hind paws, using the other two to groom his fur. “Another night, another walnut,” he mutters to himself, absently scratching his tail. He grabs an acorn from the pile opposite the hole in his tree, snags his flight bag with another paw, and hurries into the deepening gloom. 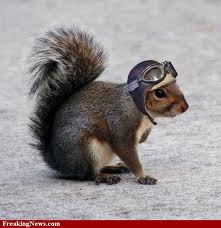 “Bite me,” replies Sal with a rakish grin. He knows Red just likes to bust his nuts. “Got anything good for me tonight?”

Sal drops his flight bag next to a recliner and wordlessly pours himself a mug of the thick, stale, caffeinated swill that passes for coffee in the hangar of the Flying Squirrel Cargo Company. Sipping it with only a slight grimace, he scampers over to the computer to check the weather. 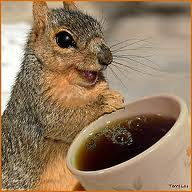 All the METARs, TAFs, and FAs indicate nothing but light winds and clear skies throughout the entire system, relegating Sal to a long night of sitting around. The only way he’ll get to fly tonight is if a regular line pilot has a mechanical.

Sal drops heavily into one of the green recliners in the pilots’ lounge, takes another sip from his cup, and calls to Red, “We playing Hearts tonight?”

It takes a few moments for Red to respond. He is busy informing the ramp squirrels which yellow bin of cargo goes to which aircraft and when all the cargo must be loaded for departure. “Yeah. That and a little Texas Hold’em. Gus still wants a chance to kick your tail after you walloped him yesterday,” Red guffaws.

Sal’s grin doesn’t reach his eyes. He’d rather be flying. Well, he thinks, a little sadly, at least the coffee and card games will help me stay awake. If only I was a flying squirrel! Being nocturnal would make this job so much easier!

His reverie is interrupted by Gus’ arrival. “You on standby tonight again, Sal?”

“Good. You’re going to owe me a whole bag of peanuts this time, buddy!” Gus settles onto one of the wooden stools and pulls out the deck with a flourish.

Sal sighs in resignation, pushes himself up from the recliner, and grumbles, “I’m going to need a little more coffee before I skin you, Gus. Deal ’em.” 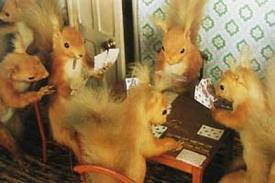 The night passes slowly, painfully. When dawn finally arrives, Sal waves goodbye to his coworkers and makes his way back to his tree. As he curls up in his cozy nest and prepares for sleep, Sal fervently hopes that he won’t be on standby again tonight. He is rewarded with vivid dreams of exuberant, joyous flight through inky skies sprinkled with stars.

Tawn is a mother, pilot, and writer who has often been accused of having too much attitude, not all of it good. View all posts by TotallyTawn

7 thoughts on “Another Photostory Competition”