I am entering the following short story based on this photo: 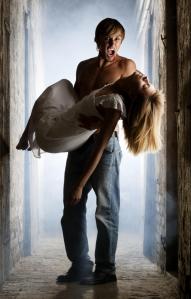 in Theresa Oliver’s most recent writing contest.  Thank you for reading!

“No. No-no-no-no-no… Noooooo!” He howled his agony but found no relief. “Sally! No! This can’t be happening…” At his feet in the misty confines of the decrepit, abandoned barn, a young woman sprawled in a heap. Silky blond hair tousled, blue eyes the innocent shade of a robin’s egg shrouded by creamy lids fringed in long brown lashes, unconscious. Possibly dead. But no longer undead. That much was immediately apparent.

Jeb crouched and carefully scooped Sally into his arms. Standing again, he noted how light and flimsy her body felt without the solid cloak of her Vampire heritage. Her torso spilled flaccidly over his left forearm, reminding him unpleasantly of the rag doll he had secretly given his favorite human for comfort before it was led to the butcher for processing. His mother had warned him not to become attached to any humans within the herd, that they were not pets. But Jeb was young, only a few hundred years, and didn’t listen. That night dinner had been garnished with the doll and Jeb had been given extra helpings to drive home the cruel lesson that humans are food. Nothing more.

A furtive movement from the velvet shadows of a stall a few meters from where he stood cradling his sister caught his attention. “What have you done?” he bellowed into the dark. Jeb did not need to ask who it was that hid in the gloom of the ancient shelter. Who else could have done this to Sally? Who else would have dared?

“…I love her…” whispered a feeble voice from the murk. “She wanted…”

Jeb hissed furiously, “She did not want this! I don’t even know how you accomplished this… this abomination! She is human now! Human! How could you condemn her to…” Jeb abruptly stopped speaking. His sister now shared the destiny of all humans. She was now nothing more than a snack. An icy finger of horror traced a sensual path up his spine. Not Sally. Not his little sister. She had not even reached the anniversary of her first century. It would be better if she were dust.

“Come here,” Jeb growled. His tone brooked no arguments and was rewarded with a figure detaching itself from the shadows and moving obediently before him. The silver glow of the moon softly filtering through the gaps above them revealed a tall, muscular, human male with charcoal hair and kelly green eyes radiating defiance even as he trembled with apprehension.

Jeb shoved the unconscious form that used to be his sister into the arms of the nameless male. “Take her and go. Do not return. I can do nothing more. Go!”

Needing no more encouragement, the dark haired human clutched his prize to his chest and promptly melted into the night. Jeb watched as long as he was able, profoundly mourning the loss of his beloved sister and fervently vowing to never again make a meal of a golden haired female.