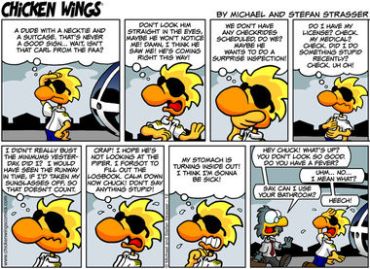 A ramp check by an official FAA representative is one of the few things that universally gives a lot of pilots the heebie-jeebies. It’s essentially an pop quiz while you’re working that can happen anywhere, anytime you are on the ground, and can have some repercussions damaging to your career if you are caught doing things you really aught not to be doing.

However, a visit from a Fed was never something that bothered me in the least. While I may have “explored the capabilities” of my aircraft during my years flying freight, I was always very conscientious about my paperwork (weight and balance, flight plans, weather briefings, etc.), had no issues refusing to fly an aircraft that was mechanically unsound, and I was always friendly and accommodating while simultaneously neglecting to volunteer any information that the inspector had not specifically requested. I understood that, like me, they had a job to do, and they weren’t happy about having to do it at 2:00 in the morning any more than I was happy to be checked. It is also quite possible that, for once, being a female in aviation was an advantage.

When an inspector is performing check on the ramp at our main hub, it was common for us to hear the warning “Blue Light” relayed over the company frequency. Where that codeword came from, I have no idea. One rainy night, upon hearing this, the guy I was flying with practically went into spasms checking and rechecking his paperwork, verifying the cargo was properly secured, making sure he had his own identification in his wallet. Then, as soon as we parked and the engines were shut down, he bolted from the plane like his eyeballs were floating and his pants were loaded with fire-breathing ants, leaving me to finish up the paperwork and deal with the Fed.

This is how this particular ramp check proceeded: